The Arctic Gateway group and its subcontractors have been very hard at work fixing washouts and repairing track along the rail line between Gillam and Churchill, Manitoba. It has been a tale of triumph and tragedy so far.

They have made tremendous progress since the line was purchased by Arctic Gateway in early September. The clock was ticking, as the construction season is short in northern Manitoba and the possibility of an early freeze made it imperative that crews work as fast as possible to repair the line before winter came.

Paradox Access Solutions was engaged to provide ground stabilization services using their Tough Cell technology. Cando Rail Services has been doing the rail repair once the surface was prepared.

A major milestone was reached when high rail vehicles reached Churchill on October 10. Churchill’s mayor, Michael Spence, greeted the pickup trucks as they rolled into the town. The trucks were followed by a Holland rail test vehicle, looking for defects. 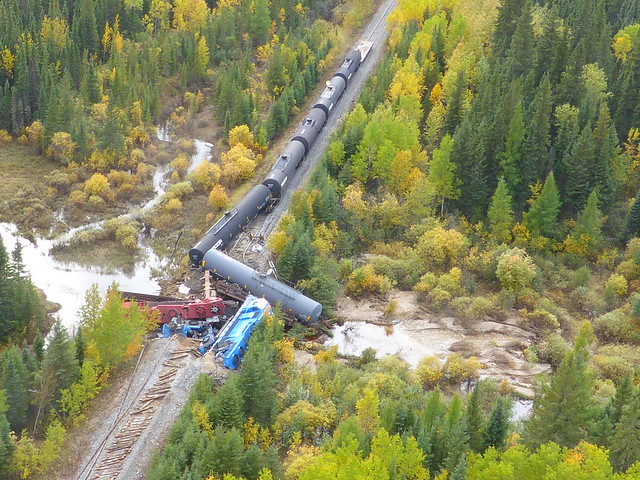 The derailment occurred in a remote location, and it was spotted by a passing helicopter who alerted authorities. It took a significant amount of time for aid to get to the site and for the crew to be extracted.

The Arctic Gateway Group issued a statement, which in part said, “Our thoughts and prayers are with the families of those involved in the accident, and with our employees. We thank all of the first responders and emergency services workers that have assisted in the initial response to this incident, and we remain committed to cooperating with these emergency services teams and all other stakeholders to provide information and support in the wake of this tragic incident.”

Canada’s Transportation Safety Board (TSB) is investigating, and their initial assessment is that two culverts were washed out. Jerry Berriault, the TSB’s senior investigator for Manitoba, told the Winnipeg Free Press that “it looks like there was an upstream release of water somewhere, possibly related to beaver activity.”

This section of line is traversed by VIA Rail’s trains as well as the Hudson Bay Railway freight trains. The line was last inspected two days before the derailment. VIA suspended passenger service between The Pas and Gillam until the track was repaired.

Now that the washouts have been repaired, the focus turns to repairing the rails themselves and ensuring they are in good shape to support freight and passenger rail traffic.

There is a lot of work ahead for the crews, but they can feel proud of what they have accomplished to date.

It’s amazing how much progress has been made. One wonders why Omnitrax never did any repairs to the line – although the $117 million investment that Ottawa has made in the repairs and future operations probably has a lot to do with that.

Good progress has been made so far. Let’s hope the weather stays good so they can finish the repairs and get trains moving on the line before freeze-up.

Thanks to Arctic Gateway for giving their permission for me to use their photos in this article. Follow them on Facebook for updates!