Back in May 2000, I was driving across half of Canada with my girlfriend (and future wife). She had been living in Regina, SK and was moving to Fredericton, NB to be with me. It was a long drive, spanning almost a week, and we were mostly just trying to get to New Brunswick as fast as we could. There wasn’t time for tourism or, heaven forbid, railfanning.

However… I did grab these photos. As we were driving along the Trans-Canada Highway, I saw what appeared to be a RailLink train beside the highway. I stopped, took three quick photos on film, then kept going. I made no record of where I was, or even what day it was, so until today, these photos were a bit of a mystery to me.

Today, I was scanning some photos and found these three and decided to scan them too. I posted them on the excellent Canadian Trains Facebook group, and within minutes, Christian Base had the answer. This was taken in Mattawa, Ontario about 50 km east of North Bay.

The passenger cars in the background were from the Timber Train that ran between Mattawa and Temiscaming, Quebec. That tourist operation ceased operation in late 2001 when its assets were seized by the Royal Bank.  The cars were purchased by the Adirondack Scenic Railroad in New York and may still be in operation today. Here’s a photo of one in Ithaca, NY in 2013. 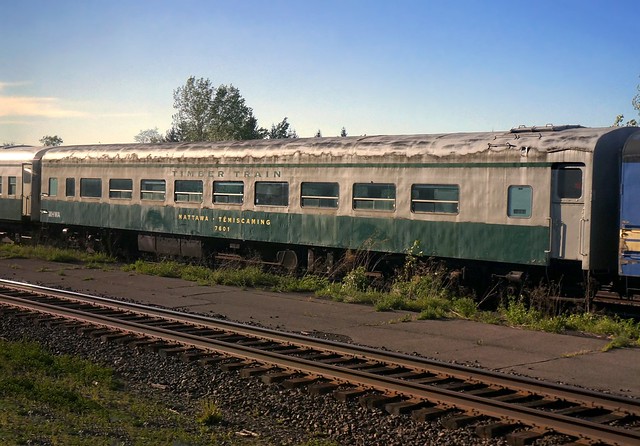 This is the Ottawa Valley Railroad, a former CP line that was taken over by RailLink on October 30, 1996. RailLink was acquired by RailAmerica in July 1999. The line ran both local trains and through CP trains between Sudbury and Smiths Falls.

Today RailAmerica and the Ottawa Valley Railroad are owned by Genesee & Wyoming. The line runs for a total of 157 miles from Sudbury through North Bay to Mattawa, then up to Temiscaming, Quebec. It interchanges with CP in Sudbury, and CN and Ontario Northland in North Bay.

I’m glad that 18 year old mystery is finally solved! Thank you, Christian and others from Canadian Trains!